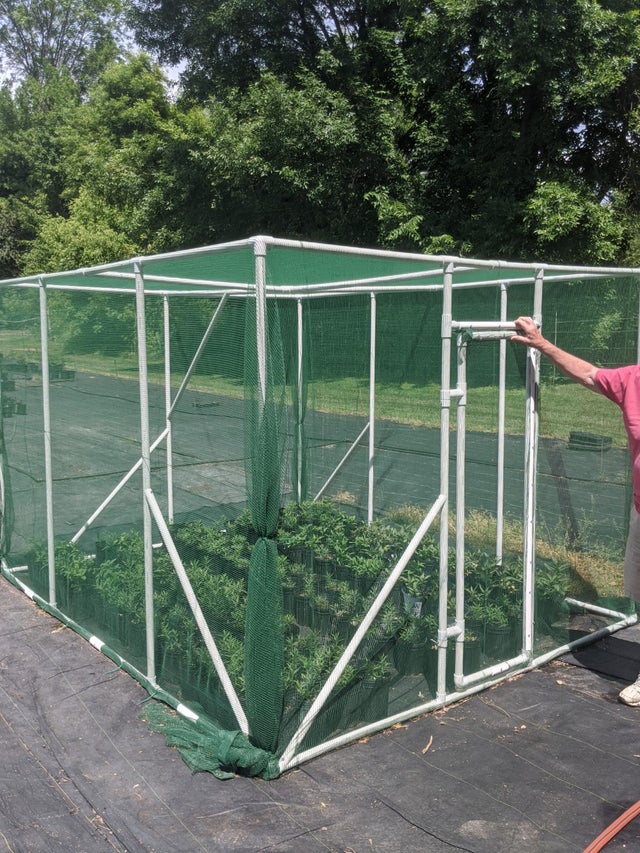 The Monarch Growing Machine (MGM) Enclosure is designed for raising large quantities of cats and monarchs safely and economically.

MGM is an 8' x 10' structure constructed from 1" PVC that uses a special plastic netting called Crop Saver that is designed to excludes all pests (including the super-tiny wasps) that are responsible for the death rate of about 90% of all monarch cats. The structure is totally enclosed and 6' high with a 2' x 5' access door. It’s shipping weight is about 75 pounds with the netting. Shipping cost: $150

Please read the below testimonials from other customers:

Just a few words about my experience with the first Monarch enclosure last season.

I setup the enclosure in May not really knowing what to expect.

As it turned out I had so many cats it was a problem keeping them fed. I started with a mix of 170 gallons of tropical and common milkweed. The milkweed was started as seedlings in early April and transplanted to gallon containers in May and the milkweed crop was fairly mature by the time I had cats.

In mid to late May I started hunting and finding eggs laid on the milkweed growing wild in our area. Once these hatched I put them in a terrarium and raised them to maturity. I then took 6 pair and put them into the enclosure.

Wow did they ever lay eggs.

I literally had hundreds of eggs in about 10 days.

There are problems with that many eggs as 170 potted plants are not enough milk weed to raise them to maturity. I had to supplement them with local wild milk weed. This year I plan to remove the butterfly much sooner so I don’t get so many cats.

If you want to raise lots of Monarchs the enclosure, if properly managed, you will get as many monarchs as you want or need.

A butterfly is a symbol of happiness and good luck in some cultures. A butterfly is also a symbol of transformation and changes that are about to happen. Another symbol of a butterfly is faith. It means you should have faith while you are going through changes. It is important not to be frustrated about the changes. Change is inevitable for growth.

As I reflect upon our experiences with the MGM (Monarch Growing Machine) last year I ponder about all the changes we witnessed and what changes we should consider for this coming year. As a whole our first-year experiences were very rewarding. What started out as a mere question, “Would The Mustard Seed consider setting up a proto-type structure for growing Monarch?” soon lead us into deeper and more frequent discussions about location, management and purpose. There was not a shortage of passion or enthusiasm amongst the team from Save Our Monarchs and the staff at The Mustard Seed.

Channeling the burst of excitement was the initial challenge as everyone was curious and inquisitive about the structure, the process, and the caterpillars! The structure was a magnet for all curious minds and eyes. It also became a time warp machine. Many volunteer hours were put into sourcing plants, watering plants, adding temporary food sources, and checking the structure for holes or issues. One could easily spend an hour in or around the MGM and not feel like any time had passed at all. It was a cheerful labor of love watching a few caterpillars crawl around the plants and on the structure.

Then a huge change occurred. A change that had been spoken about, cautioned of and heightened concern, yet we did not know what to expect. The change was the week when the eggs started hatching and a few caterpillars quickly grew to hundreds! What were they all going to eat? Can we sustain this influx of growth? Are we doing more harm than good? All these questions and more were going through our minds and into phone and email dialogs with those invested in the project.

The caterpillars quickly devoured the food sources in the structure and were finding ways to crawl out as they were in need of more food. This scene was exhilarating and concerning at the same time. We were saddened that we did not have enough food for them and did not want to see our efforts shrivel up, we wanted to see them flourish and continue on in their life cycle.

We located some milkweed growing wild in different areas of our property, so we relocated some on a daily basis in hopes that they were large enough to survive on their own. Releasing a majority of the caterpillars brought the MGM down to a sustainable

population and we were able to maintain the rest until they spun their crystallites and eventually transformed into the beautiful butterflies we were anxiously awaiting. Our faith in the process paid off and achieved our goal of increasing the Monarch population in our area.

Since that time, we have prepared an area in an old pasture as a permanent location for the MGM. The area has been seeded with the milkweed seeds from the Save Our Monarch Organization in hopes that we will be able to grow a more sustainable source of food for this year's caterpillar population. We didn’t stop there; we added a path around the area and will locate a couple benches for visitors to sit on while admiring the miracle of the butterfly.

Some of the structural improvements have yet to be reviewed. Creating a door with a better seal and closure we feel is the first improvement to address. This was the biggest area the caterpillars escaped from which was also the area of most concern with predators being able to enter as well.

The local newspaper came out last summer and wrote up a nice article about the MGM last year. We will invite them back for a follow up to see how the project is progressing. The public is hungry for this type of information and excitement and we are thrilled to be a part of this project. We are excited to see how the new Pollinator Garden grows and hope the caterpillars and butterflies give us their seal of approval this summer.